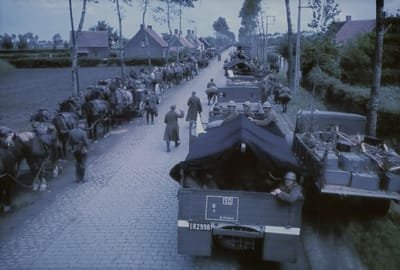 1942 Nazi’s invade a Russian harbor town capturing eight year old Klarisa Ananian’s parents. The Family is transported to a Warsaw train station to be shipped to a forced labor camp. At the train station Klarisa is separated from her parents and mistakenly placed on train headed to the Auschwitz. Her Father Ashot fearful of her eventual demise volunteers himself to the Nazis and is forced to remove gold crowns from emaciated corpses. After a few weeks of horrific work he finds Klarisa and is able to miraculously gain his way out of the camp. Separated from his wife and infant son Ashot must reunite his family and lead them through one frightful obstacle after another. Placed into physically grueling, life-or-death experiences in which they are, pitted against seemingly insurmountable odds. Klarisa and her family find the resources within themselves to prevail against the circumstances and ultimately arrive to the Promised Land “America”.